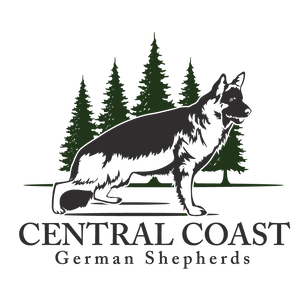 Undescended Testicle (Cryptorchidism)
It is not uncommon for a puppy less than 8 weeks of age to have his testicles undescended however, sometimes 1 or both testicles do not descend.
Sometimes when puppies are taken for an exam prior to 8 weeks of age some males will be diagnosed with a “undescended testicle”.  While this is worrisome for breeding prospects and show prospects, as a dog with a retained testicle should not be used for breeding, and show dogs are always checked for both testicle presence.  PET owners should not be alarmed as it is not unusual at this time for 1 or both of the testicles to not be present. Most of the time both testicles drop as early as 8 weeks but sometimes not until 10-12 weeks but, if a puppy is being sold with full breeding rights at eight weeks, then it is best that both testicles should be present.  If one or both testicles never drop as the puppy matures, the condition is then called a cryptorchidism.
What is cryptorchidism?
Cryptorchidism is the medical term that refers to the failure of one or both testicles (testes) to descend into the scrotum.  The testes develop near the kidneys within the abdomen and normally descend into the scrotum by two months of age. In certain dogs it may occur later, but rarely after six months of age.  Cryptorchidism may be presumed present if the testicles cannot be felt in the scrotum after two to four months of age.

What causes cryptorchidism, and how common is it?
Cryptorchidism occurs in all breeds, but the toy breeds, including toy Poodles, Pomeranians, and Yorkshire Terriers, are at higher risk. Approximately 75% of cases of cryptorchidism involve only one retained testicle while the remaining 25% involve failure of both testicles to descend into the scrotum.  Cryptorchidism affects approximately 1-3% of all dogs. The exact cause is not fully understood.

What if I don't want to neuter my dog?
There are several good reasons for neutering a dog with cryptorchidism. The first is to remove the genetic defect from the breed line. Cryptorchid dogs should never be bred. Dogs with a retained testicle typically develop the undesirable characteristics associated with intact males like urine marking and aggression.

What is the prognosis for a dog with cryptorchidism?
The prognosis is excellent for dogs that undergo surgery  before problems develop in the retained testicle. The surgery is relatively routine, and the outcomes are overwhelmingly positive.