So you want to breed 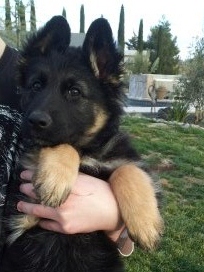 What is the standard for breeding in Germany and is there a standard in the U.S.?

This video will help you understand the true value of a high quality German Shepherd resulting from the importance of starting with a good foundation for a breeding program.  As most German Breeders do not release the best of their lines for import to the U.S. we have been blessed with relationships that have brought us the opportunity to have some of the best lines in the world bred from the S.V. standard.

This is one of the best videos I have seen that will share with you the standard of requirements for a German Shepherd to be bred in Germany.

In the U.S. It is not uncommon to find a neighbor that is breeding their German Shepherd because everyone likes her or him and because their dog is beautiful.   Watch this video and see if you agree.

TRYING TO GET A STUD OR BREEDING FEMALE FROM A PUPPY?  Bad idea.

I would like to write this article to people looking to buy a German shepherd puppy to breed.  I do not sell them to breed although I sell my puppies with limited registration, I also offer breeding rights.  I believe all people have the right of full ownership for their dog.  I hear all the time that " I just want to breed once to get another dog from my female / male to keep or give to a family member etc."  That is not always cost effective.  Why wouldn't you just go buy another puppy from the breeder that you purchased your dog from?  Easier, cheaper and very little risk!   I strongly recommend neutering/spaying at 15-18 months NOT BEFORE, please read the Important health risks page on this site!

The ones to whom I would like to direct this to is those hoping to get a top notch breeding female or stud from a puppy.  This is unrealistic and impractical. Certainly, a healthy female will 80% of the time be able to conceive.  But, in order to get a breeding female from a puppy, you take a great risk.  First, you can't be certain the hips will be top notch.  For a pet, this is not critical.  You need superior hips for your breeding stock but normal is fine for your pet.  For a breeder this is critical.   Just because you buy a puppy from parents with excellent hips doesn't mean your puppy will have excellent hips, your chances are just better that your puppy won't have dysplasia.   Buying a puppy, even from top bloodlines, does not guarantee show level conformation.  Next, the puppy you buy may turn out to be unable to conceive, may be a confrontational breeder, may have "white" heats which are difficult to time, may produce very small litters, poor progeny.  She may eat her pups, lactate inadequately, or be a poor mother.   In order to breed properly, you need to either do the hit and miss until you find a suitable breeder, or buy a proven, titled female, with a litter or two under her belt.  This can be a very expensive proposition.  On average, a good, proven female can cost an average of $7,000 - $10,000 for the initial purchase price.

Even more unreasonable is thinking you can get a top stud from a puppy.  This is also very risky.  He may not have enough libido to be a motivated breeder, his semen may have poor concentration or poor motility, produce terrible progeny.  And, as with the female, titling is very expensive.  It is just not reasonable.  And with top notch proven studs available with observable progeny for from $1,000-$1500 a breeding, it just doesn't make sense to take the risk.

I really don't like to sell to anyone with the unrealistic hope to buy a puppy which will turn out to be a top notch breeder or world class female.  The probability is against it, and inevitably they are dissatisfied customers.  If you have a puppy and raise it and want to breed just because they turned out so nice, think again.  Once you start breeding your male, he will tag your house (lift his leg and mark his territory). Your lovely house dog just turned into a outside dog.  He will drive you crazy, if not himself, when females are in heat.  He can become destructive out of frustration.   I hear this one all the time!  If you are looking for just another great dog like the one you have, because he is so wonderful, go back to the breeder where you got your dog!  It is much more cost effective and the chances you will get an equally amazing puppy out of your dog is much more likely. There are so many elements that affect the outcome besides just starting with a good dog.

Recommendation:  For all of you hobby breeders, my recommendation is never to buy a male for breeding.  Instead buy a female from good bloodlines and breed her for a stud fee to a top notch proven stud.  This will prove to be the most reasonable course of action according the most likely chance of success.  And you can sell the puppies for more money from a top stud, earning the stud fee back, without the risks and costs of trying to make your own top notch stud.  I have purchased several male dogs in hopes to make them a stud at two years old only to find that they did not pass their Xray Exams for Hips and Elbows or were not able to produce and if they can produce, are they going to produce fabulous puppies.  There are plenty of unwanted pregnancies out there and even more poorly bred dogs. Just take a look at our puppies and then look elsewhere.  You will see the difference.

If you have a puppy out of health tested parents, it doesn't mean your puppy will be suitable for breeding!  Brucellosis is just one of many concerns for a breeder.  It can be transferred from dog to dog and to humans.  It is generally recommended that a dog that contracts Brucellosis be euthanized.  It is almost impossible to clear from your facility once it is contracted.  Brucellosis can be transferred from breeding an infected animal or coming into contact with the brucellosis bacteria through bodily fluids.  Be sure that both parents are tested PRIOR to breeding.  If a female contracts Brucellosis, likely during mating, it is likely the litter will abort approx. 44-55 days into the pregnancy or the puppies can be stillborn or very weak.  The bacteria can cause damage to the internal organs and spinal cord.

Research fully before you breed!  I hope this information was helpful in your pursuit to educate yourself on some of the things to expect with breeding.

I love this video "Remember the name" showing the German Shepherd however, if you are sensitive to language, (the song in the video has horrible language) you may wish to turn down the volume prior to watching.